Prior to his work with AASA, he served as superintendent of the Andover Public Schools in Massachusetts from July 1, 2015 to December 31, 2020. During his tenure in Andover, he launched a new strategic plan focused on innovation and authentic learning. The district instituted innovative programs in authentic learning such as capstone projects for 5th, 8th and 12th graders, innovation labs and maker spaces, and a high school global network focused on the United Nations sustainability goals. Building on prior work in Hudson and Jefferson County, he and his staff continued the development an innovative elementary social studies program, One Community, One Nation, that integrates social studies, literacy and the arts and is focused on the themes of community, culture and civics K through 5. The district also pursued major initiatives in the areas of social-emotional learning, cultural proficiency, universal design for learning, and inquiry-based approaches to instruction. In addition, he initiated a major effort to address dyslexia and other reading challenges through early identification, progress monitoring, intervention programming, and comprehensive professional development in reading for all regular and special education teachers. This resulted in significant reading gains on the state assessment. He also initiated the development of a long-range facilities plan to address longstanding facilities issues that resulted in state collaboration in the replacement of an elementary school and a preschool.

Previously, from July 2011 to June 2015, Dr. Berman was the superintendent of the Eugene (Oregon) School District. During his four years in Eugene, he confronted significant financial challenges due to limitations in state and local funding. To address the shortages, the district gained passage of a $170 million bond to replace four schools and update curriculum and technology. The district also renewed its local option levy through a campaign that won 76 percent of the community’s vote, the widest margin of victory in the district’s history. In addition, the district won grants to create the first engineering design studios in the state and to redesign one middle school into a project-based STEM academy. After three years of financial struggles, reserves had been restored, the use of one-time funds had been significantly reduced, furlough days were being eliminated, and the district was finally in a financial position to avoid further staff and program reductions.

Despite the financial challenges in Eugene, Dr. Berman pressed ahead to address long-standing problems. He led the district to undertake multiple improvements, particularly at the high school level, to promote college and career readiness for all students. These initiatives included fully scheduling high school students, expanding the AVID program to all secondary schools, strengthening programs for students at risk of dropping out of high school, and creating an Early College and Career Options program on the Lane Community College campus. These changes resulted in a substantial increase in the graduation rate and a reduction in the dropout rate, particularly for economically disadvantaged students and students of color.

Equity was another central focus of his work in Eugene, including elevating the Equity Committee to report directly to the Board, initiating a minority teacher and administrator recruitment effort, creating a needs index for equitably allocating resources to schools, developing an equity lens and an equity scorecard to track performance over time, and emphasizing culturally relevant pedagogy for all students.

He provided leadership within the Oregon superintendents’ association, serving as the primary author of reports on key investments in Oregon’s future and on creating smooth transitions between high school and post-secondary education. Both reports influenced state board policy and legislation. He served on the Vision & Policy Coalition and the Funding Coalition of the Oregon Association of School Executives.

Prior to his time in Eugene, Dr. Berman served as the superintendent of the Jefferson County Public Schools in Louisville, Kentucky, for 4 years and as the superintendent of the Hudson (Massachusetts) Public Schools for 14 years. As Hudson’s superintendent, he initiated innovations in civic education, social-emotional learning, service learning, mathematics and science education reform, high school restructuring, teacher evaluation, and computer technology. He provided the leadership to help Hudson become a site for research and development in instructional improvement. He was the developer and co-principal investigator for the U.S. Department of Education Technology Challenge Grant “The Virtual High School Collaborative,” developer and co-principal investigator for the National Science Foundation Local Systemic Change Grant “Critical Mathematics and Science Synergy,” and developer and principal investigator for the Massachusetts Department of Education Technology Challenge Grant “Mobile Inquiry Technology.”

During his tenure, the Hudson Public Schools garnered numerous awards including the Richard W. Riley Award for Excellence for a high school design and program that best exemplifies a school as a center of community (2005), the Architectural Award Citation for the design of Hudson High School as an outstanding educational environment (2007), the Civic Star Award for an exemplary school-to-career program (2004), the Stockholm Challenge Award for Global Excellence in Information Technology for its work on developing the Virtual High School (2001), the Vanguard Award for implementing school reforms that enhanced student performance (2001), and the National District of Character Award for excellence in character education (2001). In addition, each school in the district received either a state or national Service-Learning Leader School Award (1999-2001).

As leader of the Jefferson County Public Schools (JCPS—a district of over 100,000 students), Dr. Berman directed the creation of a new student assignment plan that met the standards of the U.S. Supreme Court, while sustaining the community’s and the district’s strong commitment to both diversity and quality. He also launched a districtwide program to build students’ social skills; initiated freshman academies and trimester scheduling in the high schools; restructured district-level staff to drive curricular reform and promote innovation; initiated a program to place nurses in the schools; launched the development of an elementary social studies curriculum; restructured the high schools around career themes; and established partnerships with numerous community organizations and foundations aimed at enhancing instruction, leadership, and student achievement. His leadership resulted in historic gains among those high schools identified as persistently low achieving under the No Child Left Behind Act.

During his tenure in JCPS, Dr. Berman immersed himself in the culture of the Louisville community and was involved in education policy committees at the state level. He joined the boards of the Workforce Investment Board, Inc. (KentuckianaWorks), the Fund for the Arts, Who’s Who in Black Louisville, the Muhammad Ali Center, the Louisville Zoo Foundation, and Greater Louisville Inc. He was appointed to the Superintendents Advisory Council of the Kentucky Commissioner of Education; the Governor’s Task Force on Transforming Education in Kentucky; and the Governor’s School Curriculum, Assessment, and Accountability Council; and he served on the board of directors of the Kentucky Association of School Superintendents. He was also appointed as adjunct assistant professor in the Department of Teaching and Learning and in the Department of Leadership, Foundations, and Human Resource Education, both at the University of Louisville.

Prior to his work in the Hudson Public Schools, he was a founder and president of Educators for Social Responsibility. He is the author of two books—Children’s Social Consciousness and Promising Practices in Teaching Social Responsibility—as well as numerous articles and book chapters on civic education, character education, service learning, virtual education, and education reform. Dr. Berman serves on the boards of directors of the Center for Applied Special Technology (CAST) and the Education Commission of the States’ National Center for Learning and Civic Engagement (NCLCE). He previously served on the International Scientific Advisory Council of Earthwatch Institute; the Steering Committee of the Campaign for the Civic Mission of Schools; the Leadership Team of the Collaborative for Academic, Social and Emotional Learning (CASEL); and the board of directors for the Virtual High School Collaborative, Inc. (VHS). He currently serves as a Board Member Emeritus of Engaging Students (previously Educators for Social Responsibility). He is also one of four regular contributors to “The Ethical Educator”—a monthly column in The School Administrator that began in January 2012 and presents responses to real ethical dilemmas in school leadership. 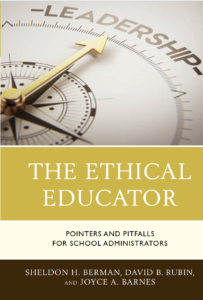 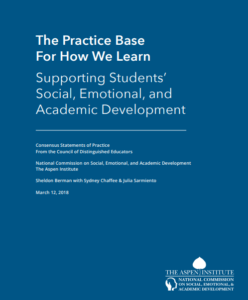